Aussie author, Liane Moriarty is my favorite right now. The last two novels I read of hers (The Husband's Secret and Little Big Lies, which I will be reviewing today) have totally kicked ass on so many levels. Moriarty has a knack for surprising the crap out of readers at the end of her novels, like out of nowhere, BOOM. And you're sitting there like OMG. 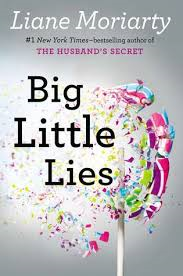 At the very beginning of Little Big Lies we know that someone has died. There are interviews throughout the entire novel featuring parents who all belong to the same primary school in a little seaside town outside of Sydney, and no one is going into detail about who died or what exactly happened. The novel leads up until the murder. Our main characters are forty-year-old Madeline, her bestie Celeste, and twenty-four-year-old Jane who has just recently moved to town with her five-year-old son Ziggy. These women share one thing in common, they all have children in the same kindergarten class. When Ziggy is accused of choking a little girl at kindergarten orientation, but demands it wasn't him, Madeline sticks up for Jane, and the three of them form a bond. Slowly Jane feels more comfortable with her new friends and opens up about her past. Madeline is constantly dealing with the fact that her ex-husband who left her when their little girl was born 14 years prior has completely changed, started a new life, and also has a daughter in kindergarten with his new younger wife. And Celeste. Poor beautiful Celeste. You will just have to wait and see what happens behind her closed doors.
at Tuesday, March 17, 2015