Special Agent Kate O’Hare and the sexiest man on the FBI's Most Wanted list, Nicolas Fox are back for another extreme take-down in The Job by Janet Evanovich and Lee Goldberg when they get the gang together to go after a ruthless drug lord who likes to torture people for kicks among other gross things. Anyways, Kate, Fox, Jake and his war buddies along with Willie, Boyd, and a few new characters pull off one hell of a con when they convince this dangerous drug lord that they have found buried treasure and pull off a crazy scheme with movie effects to make it all seem real. Remember, no one but a few people in the FBI know that Fox is working the good side (sort of), so the drug lord take down cannot take down Fox. That's when things get complicated. 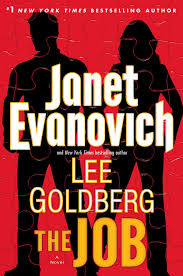 I read this novel during Christmas break, which is still happening and I'm still loving it. Anything with Evanovich and Goldberg teaming up, I'm gonna read within a few days. It's easy, fun, sexy and dangerous. But come on you two, let's get Kate and Fox naked, together, in the same room. Really though.
at Friday, December 26, 2014