the art of the english murder.

I have gotten pretty into the new TV series, Forever that revolves around an English Medical Examiner who has been alive since the early 1800's because when he dies,  he doesn't actually die. He turns up, stark naked, in the Hudson River. Anyways, he used to be a doctor a hundred or so years ago and now he helps solve murders because being alive for so long makes you seriously smart. A Jack the Ripper type episode aired a few weeks ago....which leads me to my next review... 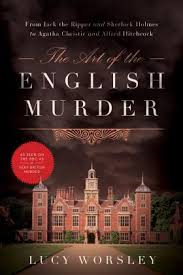 The English (and Americans, okay everybody really) have always had a fascination with crime. The more dark and twisted, the better. The Art of the English Murder: From Jack the Ripper and Sherlock Holmes to Agatha Christie and Alfred Hitchcock by Lucy Worsley retells the stories of famous murders, trials, and horrid creatures who have turned into legends for their crimes. Worsley is quite the storyteller and historian, covering the letter of the law before police forces were created in England, and so on. This book includes both fact and fiction, murder in real life and in literature, and murder based on literature so vividly, you'll forget which is which.
at Monday, November 17, 2014

Email ThisBlogThis!Share to TwitterShare to FacebookShare to Pinterest
Labels: Historical