It always excites me when the first book of a trilogy comes out. I just love trilogies, there's always something to look forward to. I especially love a good YA novel trilogy, like Edward Carey's Heap House: The Iremonger Trilogy: Book One, because it's amazing, completely odd and will keep my kiddos reading! 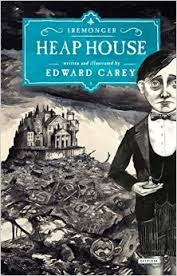 When it comes to anything YA, the stranger the better, and Carey totally has that covered with his main character, Clod Iremonger. For generations, the Iremonger family have been responsible for “the Heaps,” a tremendous sea of trash and discarded items outside an alternate-universe London. Clod is an outcast of the family because of his strange ability to hear objects talk. For example, his uncle lost his safety pin, and Clod was the only one able to find it again because he could hear it. Anyways, both Clod and a feisty orphan named Lucy Pennant alternate narrating as they begin to uncover dark secrets of the Iremonger family.
at Tuesday, November 18, 2014