daisy goes out with a bang.

The third and final installment of the urban fantasy Agent of Hel series by Jacqueline Carey does focus more on the main characters and their relationships, which we have seen progressing over the past few books, than readers are used to, but there is a kick ass plot going on as well. And boy do I love a good love triangle, especially between a half demon, a werewolf, and a zombie, all who are extremely attractive, of course. 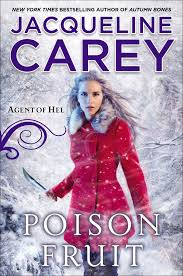 Here's a little background: Daisy Johanssen lives in the strange town of Pemkowet, populated by both mortal people and creatures of the fairytale variety. She is the child of both demon and human, raised by a loving mortal mother, and is now Pemkowet’s liason to the Goddess Hel. Daisy's job is to keep her town safe, and she's been doing it well until a new threat appears. People are being attacked in their nightmares, and that isn't even Daisy's biggest problem. Her biggest problem is the possible end of Pemkowet all together, and then there's her love triangle to think about...
at Tuesday, November 04, 2014