I never really paid much attention to Catholics until I began traveling around Europe. You can't go to mass in Notre Dame and not appreciate Catholicism, and you especially can't go to the Vatican City while in Roma and NOT appreciate the Pope. It's sacrilegious. I am still not Catholic, but I've got respect. People of God is a brand new series of inspiring biographies published by Liturgical Press. Each volume offers a compelling and honest narrative of the life of an important twentieth or twenty-first century Catholic. First up is Oscar Romero: Love Must Win Out by Kevin Clarke. 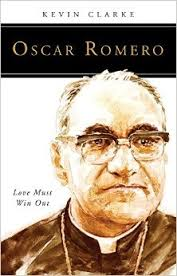 Oscar Romero was one of the great prophets of the 20th century. While acting as Archbishop of San Salvador in the 1970's, Romero began to speak out on behalf of the poor and the victims of repression, which caused A LOT of conflicts. He became the "Voice of the Voiceless" which is most likely what lead to his assassination in 1980. Kevin Clarke does an excellent (and credible) job of relaying the background behind such a remarkable life.
at Monday, November 03, 2014