the story that never ends.

I had a FABULOUS week at the beach with my mom. We spent the week doing whatever we wanted, me on the beach or at the pool reading for hours in the sun, her on the hotel room balcony working. It was like going on vacation by myself only I had someone to eat breakfast and dinner with. What a dream. 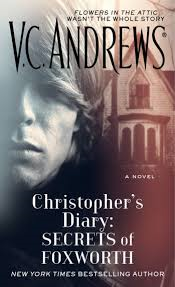 The first book I read was Christopher's Diary: Secrets of Foxworth which, as an avid Dollanganger Series reader, I was super excited about. I know V.C. Andrews has been dead for some time, but I still love whoever the fake V.C. Andrews is. Here's a background on this perspective of what happened to the flowers in the attic. It's set in modern day, our main character is a teenage distant relative of the Foxworth's named Kristin Masterwood, who lives with her widowed father in Virginia, close to the old Foxworth mansion which has now been abandoned. Her father is a contractor and has been asked to demolish the rest of the mansion (which burned down for a second time), so that someone can hopefully buy up the land and rebuild. On the site, Kristin discovers Christopher's diary, his account of the years their father was alive and the time him and his siblings spent in the attic. Kristin's father doesn't really want her to read the diary because of all the horrible rumors that revolve around this story, he's super touchy about the subject because of his late wife (who was the one related to the Foxworth's) but since Kristin is close to seventeen, he doesn't forbid it and off she goes. Kristin gets so absorbed in Christopher's story (which we get to see lots of entries of along the way) that it starts to affect her real life. She rushes through homework to get back to reading, she avoids friends to get back to reading. She becomes a little obsessed with Christopher and his family. The book ends after only two months in attic, and hopefully the next book picks up right where this one left off because I'm intrigued, and fake V.C Andrews only just started getting to the good stuff.
at Monday, October 27, 2014