OMG Gone Girl. I only just read it (snatched up a mass paperback from Target for 8 bucks, worth every penny). Sometimes it takes a bestseller becoming a movie to finally get me to sit down and read it. What a fricken ride, which I can't really tell you about because it will totally give everything away and ruin your lives. But WHOA. Okay, okay, let me digress... 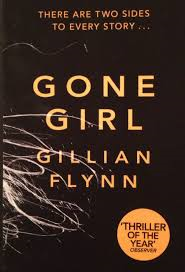 Nick Dunne and Amy Elliott were two New York City writers who met, fell in love, and did what most of us do when we first get into a relationship, don't act anything like our real selves. Oh you know you've done it. You live to impress in a new relationship. You become "cool boy" or "cool girl" - whoever that person wants you to be, you are. Well after a couple years of marriage their true colors started to show and their marriage hit some bumps. They lost their jobs, got a little broke, moved to Nick's hometown in Missouri to take care of his ailing parents, stopped loving each other, etc. On the day of their fifth wedding anniversary (on July FIFTH, ahem that's MY wedding anniversary, creepy) Amy disappears leaving signs of struggle that seem to be a little staged and a husband who has a dirty secret making him look super guilty. And I am SO sorry but I can't say anything else. It will be too spoily and I assure you, will ruin your life. But you have got to read the novel because it is unreal.
at Tuesday, October 28, 2014