As a whole, I've tried to stay away from hard drugs, even during my more experimental years. My college boyfriend once called me on a really crazy trip, and it kind of spooked me. It was like talking to a stranger, but one you liked better. Tom Shroder wrote a book all about how trippy (or psychedelic depending on your generation) drugs can actually help treat certain disorders titled Acid Test: LSD, Ecstasy and the Power to Heal. My immediate opinion? I haven't encountered a book as insightful as this one in a long while. What a trip. 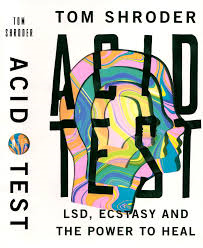 Shroder gives a pretty impressive history on LSD and Ecstasy - Albert Hoffman, the experimental years, the abuse, the backlash, the therapeutic powers, and especially MDMA's (aka Ecstasy's) role in treating PTSD, as well as anxiety and depression, which are all serious issues in our country. Shroder shows the role that psychedelic therapy can play in saving lives in a beautifully written narrative, weaving the lives of three men, that just might turn you into a believer.
at Wednesday, October 15, 2014