the wait is over.

Crowd favorite modern thriller author, Lis Wiehl finally came out with her second Mia Mystery Book (following A Matter of Trust) this summer titled Deadly Business, and fans are RAVING, including this girl. 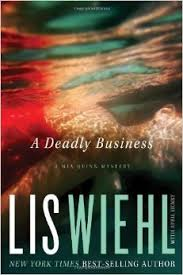 Mia Quinn is a prosecutor in King County and in this installment Mia and her children, Gabe and Brooke are still recovering from the loss of her husband, Scott who died in a car accident several months ago. However, Detective Charlie Carlson wants to re-open the case, as he has reason to believe Scott’s death was not an accident. Just another stress to add to the pile as Mia has been given the case of three youths who recklessly pushed a shopping cart over a four story drop seriously injuring a woman below. It's Mia's call whether to charge them as adults, and it's not an easy one to make since her boss's job is on the line. Chick has a lot going on and Wiehl keeps a nice pace and goes HEAVY on the action right from page one.
at Tuesday, September 09, 2014