so THIS is love.

I finally got a chance to read A Fault in Our Stars by John Green, and while I do understand the hype around it - star-crossed lovers but with cancer, it wasn't as good as I thought it was going to be. Don't get me wrong, it was good, really good. It was metaphorical and Shakespearean, annnnd a little over my head at times since these are teenagers we are talking about here, and I'M an English teacher, (not a good one mind you), but I do think parts were probably over a lot of younger reader's heads as well. 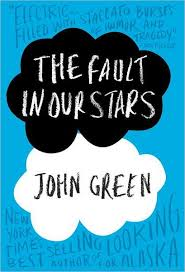 Sixteen-year-old Hazel Lancaster was diagnosed with thyroid cancer when she was thirteen. She has to carry around a mini oxygen tank because the tumors moved to her lungs, keeping them from being able to function properly. She takes classes at the local community college (as she got her GED at home during her treatments), and attends a support group for cancer kids where she meets the dreamy Augustus Waters who lost his leg to osteosarcoma, but really just attended the meeting to support a friend, as he was in remission. The two fall in love, and in return give each other a better quality of life. As a whole, the central idea, main characters as well as supporting (Isaac and Hazel's parents especially) are what made this novel kick ass.
at Thursday, September 11, 2014