I just began Ocean Beach by Wendy Wax (LOVE her), which is the second installment of a series (not sure what the name of the series is, but it involves the ocean and the beach). Anyways, I just remembered that I never reviewed the first book in this nameless series titled Ten Beach Road, which totally kicked ass. So here I am. 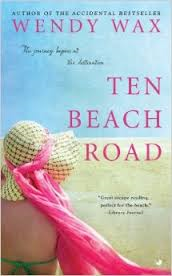 Madeline, Avery, and Nicole have one thing in common. They were all swindled by their financial advisor (in Madeline's defense, her husband was) who disappeared with their life savings, along with many others. A once beautiful beachfront house down in Florida has brought them together because the only hope they have to regain any of their lost money is to fix it up and sell it. Madeline is a recent empty nested housewife. Avery is a cute little thing and part of a popular television series where she fixes houses, and Nicole is a (prissy) millionaire matchmaker. Three completely different women picked to live in a house and fix it up to save their pathetic lives. Very real world-esque. And when Madeline's pregnant out of wedlock daughter comes down to stay with the girls and catch the whole process (the good and the bad) on tape with her video camera, this project blows up in more ways than one.
at Friday, September 12, 2014