if there was a tenth circle of hell, this would be it.

I just finished reading an oldie by Jodi Picoult titled The Tenth Circle. It was actually my airport book leftover from my trip to Puerto Rico that apparently I didn't really need. I have to say first that it wasn't my favorite Picoult novel, and I LOVE her so I'm not trying to be rude. It just wasn't in my wheelhouse as many of her past bestsellers have been (I still obsess about House Rules to this day). The Tenth Circle (deriving from Dante's circles of hell) revolves around a comic cartoonist named Daniel Stone and his abnormally close relationship with his daughter Trixie. Daniel was a stay-at-home hubby while his wife Laura taught at the local college, so when his fourteen-year-old daughter came home in the middle of the night from a "sleepover" and he found her crying in the bathroom because she had just been raped by her ex-boyfriend, you can say Daniel felt the urge to murder the guy a little more than your average dad. This story goes through the motions with Trixie and her parents, and even Jason, the boyfriend and the lies they all tell to save each other from the truth. 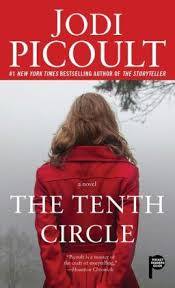 The storytelling was excellent as usual. I loved how Picoult narrated specifically about each character only a page and a half at a time. She kept me moving along at a nice pace so I didn't get bored or uncomfortable because rape is one of those topics I don't particularly enjoy reading about. Not for any reason other than the thought of it makes me extremely uncomfortable.
at Tuesday, September 02, 2014