an island in the sun.

Since cable is full of re-runs this week because no one feels like working. Here is a re-run for you of one of my favorite books of 2014.

I just finished up The House on Mermaid Point (the third novel in Wendy Wax's beachy series) and I have to say, it was SHOCKING. My favorite book of the series by far, but none the less, shocking. Maddie, Kyra, Nikki, Avery and Deirdre (as well as Dustin, of course) are headed to Key West for their second season of Do Over. They are to fix up a giant estate on a private island belonging to a celebrity and turn it into a Bed and Breakfast. The celebrity is former rock icon William Hightower who's music got Maddie through the angst of her teenage years. William is now washed up and just out of rehab for the umpteenth time, not wanting to have anything to do with the show or the ladies, but desperate because he's broke, and now sober, out of the music scene and has no other way of making any money at the moment. 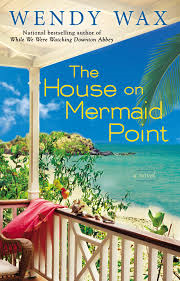 Much of this novel revolves around Maddie who is a fifty-one year old ex-housewife. My mother LOVED this book best because she could relate to Maddie being that they are the same age. And even as a late-twenties girl, I loved the character of William (I mean, I didn't but I did). I loved how Maddie reacted to meeting her teenage rock star crush and how she grew as person during the course of this novel. I just hope there is a number four in the works, or I'm going to be real pissed.
at Tuesday, December 30, 2014