Edan Lepucki predicts the (near) future in her debut novel, California where the metropolis of Los Angeles is slowing wasting away to nothing, leaving its residents without food, water, or a home to call their own. The country is facing a meltdown of disastrous proportions. Married couple Cal and Frido escape to a secluded cabin in the woods and attempt to live off the land despite their lack of survival skills being from a large city. Once Frida realizes she is pregnant, the two realize they cannot do this alone and make their way to a more populated area. Keep in mind that California is less a post-apocalyptic dystopian novel than it is a book about love and marriage, which is what makes it a good read filled with characters you can empathize with. No one wants to think too closely about a future that may or may not be that far away. 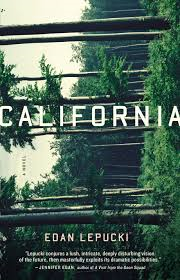