Touching again on the 100th anniversary of WWI, I was sent a very unusual account of a soldier's time spent during the first world war in the form of a graphic novel titled Line of Fire: Diary of an Unknown Soldier. The diary includes the first months of the war that everyone thought would be over by Christmas, yet lasted 4 years killing millions. No one has any idea who the author is, what happened to him, or why he stopped writing, although we can imagine. The graphic novel part isn't even the strangest part of this book, the strangest part is that its illustrator Barroux, found a diary on an ordinary day, walking the streets of Paris, in the trash. He scooped it up, created some drawings to go along with the writing, and now we have a truly unique piece of history to enjoy. 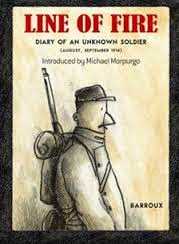