is america still the hope of the world?

It's pretty common knowledge today that America is not where it should be. There is far too much debt, a lack of jobs, and I won't even get started on the healthcare. In America: Imagine a World without Her, Dinesh D'Souza attempts to answers the questions of what needs to be done to get our lady back on track. Let it be noted, that despite all of its problems, D'Souza believes that America is still great and worth defending. And another note, I received the audiobook for review as I find it much more interesting to listen to a book on tape on this subject rather than read it myself. Just my personal preference. 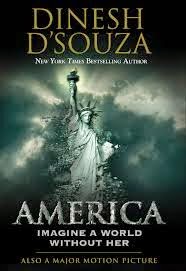 D'souza starts out strong with three indicators that prove America is on the decline “First, the American economy is stagnant and shrinking relative to the economies of China. Russia, India and Brazil…Second, America is drowning in debt. While China is the world’s largest creditor nation, America is the world’s largest debtor nation. At $17 trillion, the national debt is now bigger than the total sum of goods and services that America produces in a year…Finally, America is losing it’s position in the world.” Well if that isn't a wake up call, I don't know what is. D'souza has also packed this book with America's history (slavery, the Constitution, Capitalism, etc.) and his ability to reason, spur debate, and provoke thought, which is what an extremely intelligent person is supposed to do with such a book.
at Wednesday, August 20, 2014