if i stay spoiler!

When I finished If I Stay, I had no idea that there was a sequel. I complained on Facebook how short I thought the novel was, and how I wanted more, and one of my former students was like, relax Miss Hagen there's another one. Oh.  Where She Went by Gayle Forman picks up three and a half years later and is narrated by Mia's high school boyfriend (from the first novel) Adam Wilde. The reason why these two very different teenagers fell in love in high school was because of their shared love of music. Now, at age twenty-one, Adam's dreams have come true, he is still the lead singer, guitarist, and songwriter for his band Shooting Star, but they have made it BIG, like Grammy big. Double Platinum record big. Paparazzi big. But something major is missing. Mia. She recovered from the accident and left for Julliard three years earlier and he hasn't seen her since, without any real explanation from her. He let it go. Became depressed and wrote songs. His band's record Collateral Damage was a complete result of Mia breaking his heart into a million pieces, and it turned him into a total rock star. But he is still left without Mia. 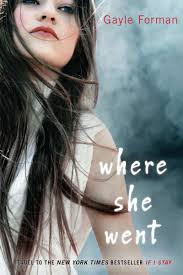 While in New York tying up some loose ends before heading on a plane to London to begin his second giant tour, Adam needed some space (he actually has a lot of issues that you'll read about). He decided to stay an extra day in New York to get his barring's and while walking around the city saw Mia's face plastered on Carnegie Hall. She was playing, and twenty-five bucks bought him a ticket and a shot at a second chance.
at Tuesday, August 19, 2014