some lessons are learned the hard way.

Prison Baby is a revised and substantially expanded version of Deborah Jiang Stein's self-published memoir, Even Tough Girls Wear Tutus. Deborah was adopted as a baby by a Jewish couple, and had a pretty normal childhood despite the fact that her parents were white and she was a bit Asian. I feel like all adopted kids have a certain amount of issues with abandonment and insecurities, but Deborah's story is one I have never heard before. She came from a cocaine addict who gave birth to her in prison. Deborah actually spent the first year of her life behind bars. She discovered this on accident while snooping around her parent's things when she was twelve, and the walls came crashing down around her. 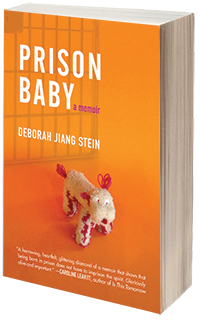 From that point on, Deborah dealt with the shame of her biological mother and her shame of being a racial mix of what she didn't actually know, in the worst possible ways. To put it politely, she became mentally unstable. She turned to drugs, and drug smuggling. Three cocaine-filled balloons stuck up her lady bits kind of smuggling. She refused to confront her problems, and she hit rock bottom before attempting to find her birth family and pull her life together.

Deborah's story is one that has and will help many women deal with mental illness and dark pasts. She currently speaks at women correctional facilities, and if this turns even just one life around, Deborah should be so proud of the woman she has become.