sister anselm is back!

J. A. Jance is back with her latest installment of the Ali Reynold's Series titled Moving Target. I have only taken the time to review one other novel from this series (Left for Dead, 2012), but that doesn't mean I don't love them all, I do. But between Jance and Evanovich, I just can't keep up. 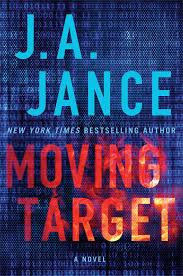 In Moving Target, Ali decides to travel to England with her 80-something longtime family friend/employee, Leland Brook who has been estranged from his own family for decades because on account of he's gay. Ali should be back in Texas planning her wedding to her fiancé, B. but seeing as that's super stressful, she'd rather be in England with Leland's crazy family. In England they are told that Leland's father's death was actually a murder, and the case is still open, and pretty fricken cold, but that doesn't stop them from diving right in to crack the case.

Back in Texas, B is following the story of Lance Tucker, a teenager super gifted computer hacker and who was literally lit on fire in the detention center where he was doing his time for hacking into his school's computer system. It was B’s testimony that put Lance in the facility, and with this attack, he feels he needs to get to the bottom of why someone would attempt to murder a kid over a computer program.
at Friday, April 11, 2014