Mary Higgins Clark novels are ALWAYS something to look forward to, and her latest thriller, I've Got You Under My Skin is no exception. 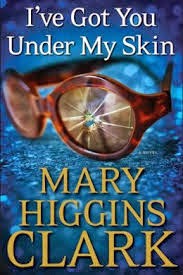 Reality television producer, Laurie Moran has an idea to create a reality series that opens cold cases anywhere from twenty to thirty years old. Her plan is to get the point of view of the people who were closest to the victim. The whole premise of this series hits close to home with Laurie because her own husband was brutally murdered five years ago, and the only lead they have is that he has blue eyes and is planning on coming back to kill her and her son, Timmy. Timmy was only three years old when his father was shot and killed, and he is the only one who saw the killers face.

Timmy's now eight, and off to summer camp while his mom launches "Under Suspicion". The first episode is about the murder of Betsy Bonner Powell at her daughters graduation party. Her husband, Robert who has never remarried is still searching for his wife's killer, suspecting it was someone who attended the party. As close friends and family recreate the scene for other's viewing pleasure, Laurie doesn't realize that she is being stalked by Mr. Blue Eyes while she works. And MHC does what she does best, keeps the tension mounting and creates the kind of suspense that will keep you up at night. Get it girl!