my favorite kind of historical fiction.

I am a sucker for a good brother/sister story. I adore my brothers, especially my baby one who I honestly thought was God's gift to me. He's twenty-five now and I still feel that way. Jennifer Vanderbes' historical fiction novel titled The Secret of Raven Point tells the story of what a sister will do for her brother, and that's anything. 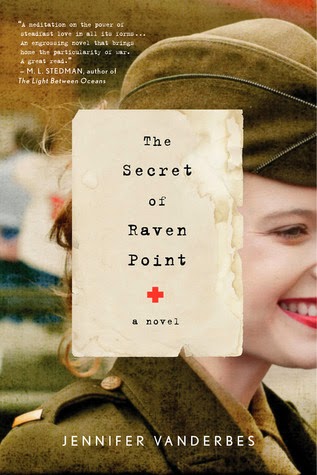 It's World War II and Juliet Dufresne's brother, Tuck is in the thick of it. When she receives a cryptic letter from him, and shortly after he is reported MIA, Juliet lies about her age so she can volunteer as a nurse, hoping to find herself near where he was stationed so that she can find him. While stationed just north of Rome, Juliet comes in contact with a patient named Christopher Barnaby who is on trial for desertion. When this extremely troubled man mentions Tuck, it gives Juliet just enough hope to keep going, even as she sees the destruction war can do to people mentally and physically.

Juliet does have brushes with romance here and there, but this novel is more about the love of a strong-willed sister for her brother and her determination to find him.
at Monday, March 24, 2014