unlike any nun i've ever met.

The Chalice by Nancy Bilyeau is the second book in the Crown series that takes place during the reign of King Henry VIII. We met Joanna Stafford in the first installment of the series (The Crown) and she continued to become one of my favorite heroines to date, at least in the historical fiction genre. Joanna is a nun during the terrible period of the Reformation as King Henry orders monasteries and convents to close down leaving Joanna, as well as other nuns, monks, friars, and priests to be tortured and killed, unless they escape. The year is 1538, and England is in the midst of bloody power struggles between crown and cross that threaten to tear the country apart. Since her escape from The Tower of London, Joanna has lived a quiet life as a seamstress, until she decides to give into fate and join the efforts to destroy the King. 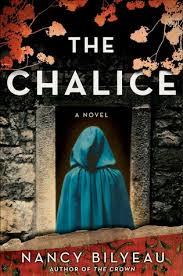 England has such a dark history, and Nancy Bilyeau flawlessly brings this time period to life.
at Wednesday, February 26, 2014