As I mentioned before, I received the latest Stephanie Plum novel, Takedown Twenty for Christmas. Well, I gobbled it up within two days, which is pretty normal for me. It was such an easy read that I just breezed right through it, blast. I loved it, just as I've loved all of Janet Evanovich’s installments revolving around Jersey girl Stephanie Plum, my favorite bounty hunter who makes a habit of pissing off the wrong people and getting her car blown up on the regular. 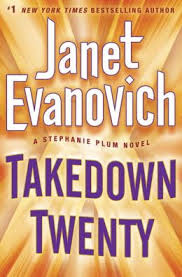 All is pretty normal in Trenton, other than the fact that Lula and Stephanie spot a giraffe running through the ghetto and no one seems to feel the need to report it, including them. Stephanie is out to catch hometown favorite, mobster Uncle Sunny, who jumped bail after being brought in for running over a guy, twice. None of the Burg is interested in helping her, as Uncle Sunny is one of those mobsters that everyone likes and is related to, including Morelli. On the side there is Ranger (who really is her man on the side, sort of) who needs Stephanie's help solving the murder of a client's mother who played bingo with Grandma Mazur and turned up dead in a dumpster, along with a handful of other old ladies and no one knows how the killer hasn't been caught. As usual working with Grandma Mazur and Lula turns stressful, but at the end of the day you want the crazy on your side.
at Tuesday, January 07, 2014