Nicholas Sparks' latest novel The Longest Ride has a love story for the young and the old(er). Told in three different perspectives, and two separate storylines, we first meet 90-something Ira and his late wife, Ruth. Although I am in my twenties, Ira and Ruth's story was my favorite of the two. The story opens with Ira who has just gotten into a car accident that has him pinned in his vehicle. It is winter time in North Carolina, and the weather is cold, worrying Ira more and more as the chapters pass. In his car, he is able to see and speak to his wife Ruth, who died nine years previously. Together, they rehash their love story, showing readers how love can indeed conquer death. 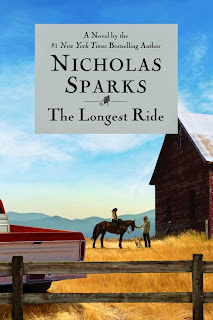 Twenty-one year old Sophia is a senior in college and a sorority girl, although she doesn't act like the traditional form. She has just gotten over a breakup when she meets Luke at a country barn party after her and her girlfriends travel to a bull riding show. Luke has been riding bulls since he could walk, and he's extremely good at it. He and Sophia hit it off instantly, despite their obvious differences (she's an art history major from Jersey with immigrant parents, he works on his family's ranch, rides bulls and is super country). Their love story is sweet, but a little immature for my taste. Probably because I'm getting older. I just couldn't help but fall in love with Ira and Ruth, to me, they trumped.

I'm sure you all are wondering how Sparks managed to intertwine two couples who are not related and 70 years apart in age. Let's just say he did so in his Sparks kind of way.
at Wednesday, January 08, 2014