When I think of Chicago, I think of deep dish pizza and cheesecake, veggies don’t typically come to mind. But apparently, Chicago is home to the most famous vegetarian hot spot around, the Chicago Diner. Boasting their thirtieth year of vegetarian and vegan cooking in the windy city, Jo A. Kaucher, Kat Barry and the rest of the Chicago Diner crew have released The New Chicago Diner Cookbook: Meat-Free Recipes from American’s Veggie Diner which includes over 100 Diner-tested recipes that will light up your veggie lifestyle. 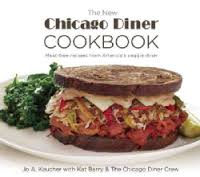 The Chicago Diner has this ability to make vegan food taste amazing, and their cookbook doesn’t let you down. It’s filled with all of their secrets and recipes that will leave you satisfied and feeling energized, even though you’re only eating veggies, tofu, and beans. It’s crazy. Their ranch dressing recipe is to die for, and their meat substitutes will have you thinking that Wilber’s death was such a waste.
at Tuesday, January 21, 2014

Email ThisBlogThis!Share to TwitterShare to FacebookShare to Pinterest
Labels: Cookbooks