The Storycatcher by Ann Hite is not just a story about ghosts, FYI, but they are actively involved. Told in shifting points of view by women, from varying times including the 1930’s to the 1800’s, this story revolves around a sixteen-year-old servant girl named Shelley Parker, whose mother works for the local minister and his family, and Faith Dobbins, the minister’s daughter. 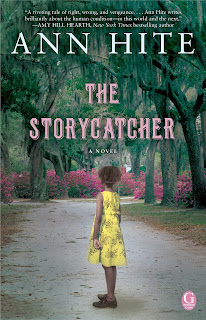 Shelly has the ability to see ghosts, and rumor on the street is that they won’t go away unless she helps them. It is obvious to Shelly that the minister her mother works for, Pastor Dobbins is evil, and it is reiterated by a ghost named Armetta Lolly who came to Shelly asking her to expose the dark truth about him.
The storyline is complex. There are a ton of characters both dead and alive that you must keep straight or you’re going to be super confused. BUT it’s such a fabulous ghost story, that if you’re the type to enjoy ghost stories, I’d get my hands on it in a New York minute.