smile, and put on your big girl panties.

Everyone and their brother's mailman's grandmother knows how much I enjoy reading anything by Janet Evanovich. So when Stephanie Evanovich (I'm assuming this is no coincidence) came out with her debut novel, Big Girl Panties, I was all over it. I wasn't prepared however, for how incredibly sexual my reading experience was going to be. We are talking phrases like "sweet creaminess" and "wet cavern" were used. I am super raunchy, but I still couldn't get myself to read all the gory details without some major blushing. My eyeballs are still scarred. Let me give you the low-down on the plot and such. 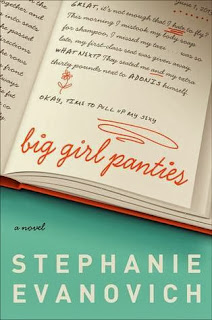 Holly Brennan is a thirty-two year old, overweight, widow who had sad childhood, so when she left home to go to college, and met Bruce, a super boring, but super caring guy, she married him without a single doubt. After eight years of marriage, Bruce was diagnosed with cancer and died, leaving Holly family and friendless in New Jersey, where Bruce had his treatments. After taking a trip to Toronto to close up a last business deal of her late husband's, Holly gets on a plane and meets Logan Montgomery, a super sexy personal trainer who decides to take her on as a client and change her life.

Logan is pretty famous, as he trains big shot athletes, and usually doesn't take on people like Holly who are just starting on their road to a healthy lifestyle, but there was something about her that made him want to help. Logan does end up changing her life, and their relationship becomes more than business when Holly begins to drop the weight, and other men begin to notice her. I don't think it's entirely realistic that a man as sexy as Logan is described, would change his taste from blonde models, to chubby red heads, but it sure was an entertaining read, and reminds us not to be so quick to judge.
at Tuesday, November 12, 2013