not your typical vampire novel.

The Farm by Emily McKay is a YA novel that will keep all ages on the edge of their seats. America has just been attacked by a band of blood-sucking Ticks devouring all humans who cross their path. Twin sisters Lily and Mel were sent by their parents to the Farm for their "protection" and they (primarily Lily) share their story. 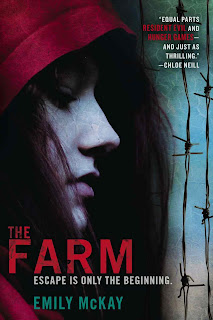 After the huge attack, parents were convinced that the Farm was the only way to keep their children safe. Little did they know, the Farm is a quarantined camp where teenagers live and farm out their blood FOR the Ticks. Lily and (autistic) Mel are about to age out of this little program, and instead of waiting to see their fate, Lily comes up with a plan to get them out of there. But who can they trust? Once they leave the Farm, there are no electric fences protecting the girls from these blood-sucking monsters. Lily realizes that it's really up to her to protect her sister and keep hope that they will find some sort of normalcy in this terrifying world.
at Monday, January 14, 2013