i hope you're not busy for the next two days.

Hey, Happy New Year, people!! I am loving this whole Christmas Break thing - it's given me a lot of time to do absolutely nothing but read whatever the hell I want. I just finished an older Jodi Picoult book titled Keeping Faith, I basically spent the past 48 hours sucked in. It was a pretty wild ride. 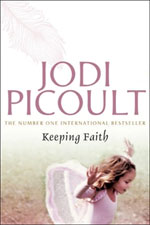 Mariah White is head over heels in love with her husband, Colin. At the beginning of the novel their marriage seems idyllic. It's five to six pages of my husband and I can't stand to be away from each other, then BAM. Their daughter, Faith left her ballet leotard at home and when the two went home to grab it they find Colin naked in the bathroom with ANOTHER WOMAN. Picoult unravels Mariah and Colin's past pretty quickly during the aftermath. It turns out that Colin has made a bit of a habit of cheating on his wife, he did so seven years ago and Mariah was so depressed after finding him in bed with another woman that she attempted (and failed) to kill herself. Colin being the awesome dude he is, sends his wife to a mental institution. When Mariah's mother found out she came to save the day, and the two women have been very close ever since. It is her mother, Millie, who starts picking up the pieces after this most recent calamity.

To make matters more weird and uncomfortable, seven-year-old Faith starts seeing God. The rest of the story is about how the family deals with this. People start hearing about this little girl who talks to God and then seemingly performs miracles, and their lives turn into a circus. There are a lot of objective religious aspects to this novel, and Picoult handles them beautifully. She is a professional, afterall.
at Tuesday, January 01, 2013