YA novels are getting creepier and creepier.

In Kim Harrington's The Dead and Buried, Jade is the new girl in town. She just moved into a lovely house, in an upscale neighborhood with her family, and can't wait for a fresh start. When school begins, Jade gets the typical new girl whispers, but they get unusually worse, fast. Jade quickly finds out that one of the students that went to the school died in her house just a year before. Kayla, who was very popular and pretty much ruled the local high school (think Regina George), was allegedly murdered in Jade's house. Awkward. 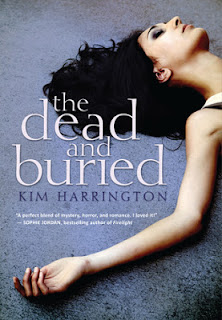 Jade's little brother Colby tells her that he sees a girl around the house with long hair. The family thinks his imagination is getting the best of him until Jade sees her too, and little Miss Kayla isn’t happy. Kayla wants to know who killed her, and will stop at nothing to find out. We are talking crazy bossy ghost teenage girl scorned over here. With the help of Kayla's diary (which we get to see), Jade is on the case to find the truth behind Kayla's death in hopes that she can have her own life back.