the end of oz.

I was never a huge fan of "The Wizard of Oz" as a child. Visually, I thought it was rather creepy.  However, Wicked by Gregory Maguire is one of my favorite books. Go figure. Three books later, the Wicked Years series has come to an end with Out of Oz: The Final Volume in the Wicked Years. 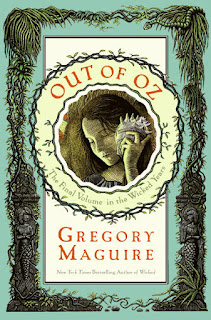 In all of his books, Maguire includes a number of summaries and a timeline that will help you understand the ways in which these books intersect with L. Frank Baum's original series. In the final installment of the series, the land of Oz is in the midst of social unrest, once again. The Emerald City is preparing to invade Munchkinland, Lady Glinda is under house arrest as a possible traitor to Loyal Oz, and the famous Dorothy returns to Oz, where she is put on trial for the murder of the Wicked Witch of the East. The ending will leave some feeling a little conflicted. Let's be realistic guys, nothing can top Wicked, so don't go into this novel expecting it to.
at Friday, December 14, 2012