set aside some time for this read.

The Elephant Keepers' Children by Peter Hoeg is literally 496 pages. That being said, it is a rarity in my current life as a first year teacher, that I am able to sit down and read through a novel so long. As soon as I opened to page one, and met fourteen-year-old Peter, I was hooked. 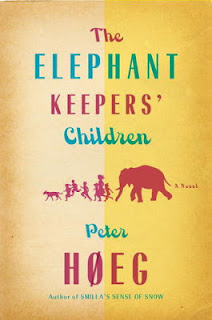 Peter and his two older siblings are looking for their parents who have mysteriously disappeared. They are both devout members of the one and only church on the fictional island of Fino, where all religions coincide peacefully. Until now it seems, to these three teenagers, desperate to find their beloved parents.

The eccentricity of the novel is apparent in the characters Hoeg as created, as well as the title itself. Peter and his sister, Tilte have a theory that their parents are “elephant keepers, although they don’t know it” this reference to an old Indian saying denoting that “they have something inside them that is bigger than themselves, and over which they have no control." It's really a crime thriller, yet filled with mystical characters and a surprising amount of laughs.
at Wednesday, December 12, 2012