One of my very good friends, Kristen and I have random girls nights where we usually do the following: drink and watch a movie, drink and cook a meal, drink and run around with crazy fur vests on, or drink while we relax with good books. We call the last activity "a nip and a tale"...which leads me to my next review... 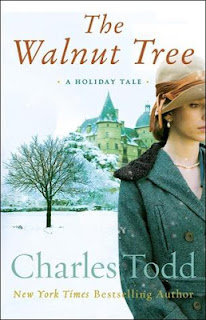 The Walnut Tree by Charles Todd left me wanting only one thing, more. It's a tiny little tale, that packs a punch, but I would have loved a longer version. In this 1914 WWI military romance, Lady Elspeth finds herself in France caring for her dear friend Madeline, who has just learned her husband is being called up for duty and must leave just as she is about to deliver her first child. During her stay with Madeline, Elspeth becomes rather intrigued with Madeline's brother, Alain who she also learns is about to leave to join the war. On their last night together, Alain asks Elspeth for permission to court her when he returns from the war, and offers her his mother's ring as a token of their promise, which she accepts. Elspeth's journey home to England is not easy, she finds herself trapped on the French coast where she is almost killed until her childhood friend, Peter rescued her. Instantly there is a spark between the two, and as she makes her way to London, Elspeth begins to worry about her promise to Alain.

Back in London, Elspeth feels she can't return to her life of luxury while so many are in need. She decides to make herself useful and sign up as a nurse. This way she will be able to learn the fate of the men she is torn between.
at Thursday, December 20, 2012