The Thing About Thugs is a dark-humored satire that contains everything that makes 19th century British literature so enticing: love, sex, murder, grave-robbing, humor...the works. Tabish Khair's novel follows several characters, including a self-professed Indian thug, a trio of Englishmen who turn criminal, along with various others who complete the package. The chapters are pretty short, sometimes just a page, so the book is one of those that you can dip in and out of a little at a time, yet still follow along easily. 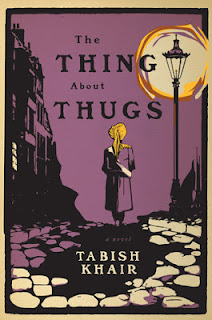 A series of brutal murders start to take place in the city, during which the heads of the victims are stolen. However, there is no real mystery in this story, it more focuses on the social status of the time period. Rich versus poor. Khair paints a pretty bleak picture of Victorian London where most of the action takes place. The novel is very literary, like one you'd read with your AP English class. As an English teacher, I appreciated all of its elements.
at Wednesday, November 07, 2012