"i needed to do something different, something that i could be proud of if i saw a picture of me doing it."

Oppen Porter is not your average Joe. He's a twenty-eight year old, self proclaimed slow absorber, who appears to be pretty regular until you get to know him. He's in the hospital on his supposed death bed, wanting to leave behind a recording of his life for his unborn child.

Oppen spent his childhood in a small town where his innocence was accepted, but clearly not respected. He was constantly teased, which I'm sure was excused as good natured rather than douche baggy. Oppen spends most of the novel telling of the time after his father unexpectedly died and he went to move with his Aunt Liz in Panorama City.

Antoine Wilson creates a wonderfully unique narrator in Oppen, who is determined to become a "man of the world" and realizes that the world is just not acceptable. Oppen has a voice worth hearing, and Panorama City is a book worth reading. Pick it up September 25! 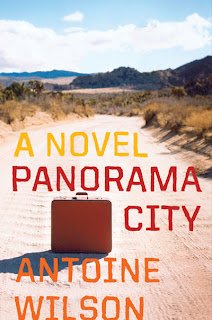