well this gets pretty serious.

Don't hate me, but I'm not super into politics. I'll pay a little more attention this time of year because of the upcoming election. But, all in all, it's just something that I truly feel I have much control over. Nor do I feel confident that I have the smarts to fix most of the problems in our country. Oh, except for the schools, give me five minutes and a billion dollars, and I'd be happy to fix those. I've been a teacher for five minute and I'm already cocky.

Reporter and author Katie Pavlich's true story, Fast and Furious: Barack Obama's Bloodiest Scandal and Its Shameless Cover-up, not only sounds really fricken intriguing, but it also reads like a novel. It is based on the Fast and Furious program, which lacks Vin Diesel and turned into quite the scandal over the last couple of months. 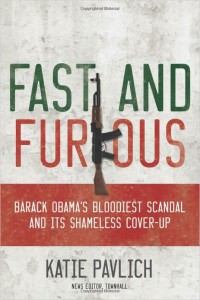 Fast and Furious was a “gun-walking” operation conducted by the Phoenix, Arizona branch of the Bureau of Alcohol, Tobacco, Firearms, and Explosives (or the ATF) from 2009 and 2011. The idea was to encourage licensed Arizona gun merchants to sell firearms to known criminals in the hope that law enforcement would be able to then trace the weapons from Arizona as they crossed the border into Mexico, slowly making their way into the hands of bloodthirsty Mexican drug cartels. Umm, that sounds safe. President Obama claims to have no knowledge of the operation. However, Pavlich and her little expose beg to differ.
at Saturday, August 25, 2012