it is sunday afterall...

I may not be an avid Bible reader in my adult life (a disappointment to my mother), but I remember all of the stories I grew up learning about in Sunday school. Ruth has always been one of my favorites, a very close second to the mildly more glamorous Esther. Ruth is the daughter-in-law that I will never be able to compete with. Her husband dies, and instead of going back to her family to start a new life, she stays with her mother-in-law, Naomi. They travel to Bethlehem to work for and live with a cousin of Naomi's, and ends up marrying the man, Boaz. By sticking by her mother-in-law who lost everything, she ended up marrying a wealthy, super sweet guy and eventually birthed Obed who was the grandfather of King David. Hello amazing karma, oh and God, too.

Liz Curtis Higgs tells the story of Ruth in a novel approach to Bible study, which I gotta say, was far more fun than the King James version. Those of you, like me, who grew up reading and listening to stories from the Bible will appreciate Higgs' rendition of the book of Ruth in The Girl's Still Got It. And those of you who are not familiar with the story, or the Bible for that matter, will like it even more. 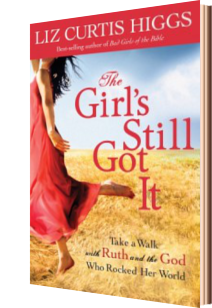 I may be occasionally shrewed and foul-mouthed, but that doesn't mean I believe that this whole universe was an accident.
at Sunday, August 12, 2012

Email ThisBlogThis!Share to TwitterShare to FacebookShare to Pinterest
Labels: Christian