a love/hate relationship with money.

I hate money. Probably because I don't have any. I have been working this whole summer school gig for almost five weeks, and I JUST got paid for the first time. It was nice, but also kind of annoying after seeing all of the taxes that were taken out. Blah. I hate money.

Eddie Campbell is an award-winning graphic novelist who titled his latest, The Lovely Horrible Stuff. I bet a dollar that my relationship with money is worse than Campbell's, but I can't help but like the guy. Eddie Campbell himself is the one constant in this graphic novel about money, and he makes me laugh a lot. He mocks the value of money, and jokes about all of the things people do or don't do to save money - like don't beat the crap out of your son because you'll just have to pay the medical bills. Gems like that. 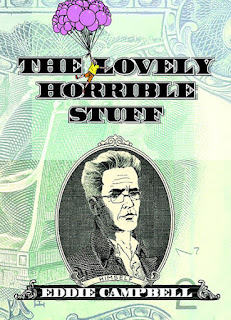