there's always something new to learn about einstein.

Before I begin my review on Einstein's Jewish Science by Steven Gimbel, I'd like to share with you my favorite Albert Einstein quote. 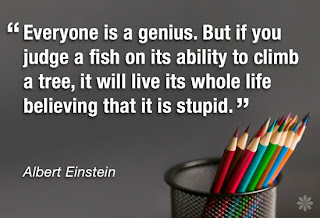 As a teacher, this speaks to me.

And FYI, I am officially a REAL teacher...for the summer. I accepted a summer school teaching position which began two days ago! I pretty much just got really, really lucky. An English teacher backed out, and they had no time to really look for someone experienced, and I was just standing there, looking all hopeful and pathetic, so they chose me. I am out of my mind excited to spend my summer with a bunch hoodrats (and they are ALL hoodrats). I am going to have fun with it. If you need me, I'll just be sitting over here on cloud nine.

Back to Einstein. Apparently he was Jewish, which I was unaware of. My mother was a little embarassed when I told her that. The 'stein' was supposed to give it away, it's a good thing I'm pretty. Anyways, I've got a Jewish friend, so I am pretty fluent in Jew, my politically correctness needs some work though. The main idea of Einstein's Jewish Science is whether or not religious beliefs or backgrounds had an effect on Einstein's scientific endeavors. Gimbel has done a ton of research to make his case on Einstein and a number of other famous scientists. I have never thought of science to be "Jewish-style" or "Christian-style" probably because I was never any good at science. But I can totally see how religion would affect scientists experiments. You are what you believe in. Gimbel has a lot of interesting examples of how these scientists acquired new knowledge and the different ways that each of them went about making new discoveries.

A book like this is an acquired taste. And you should know by now if this is the kind of book you would want to read.
at Tuesday, July 10, 2012

Nice post... Thanks for sharing such a nice post...... And I would like to share my favorite quotes about einstein
"Learn from yesterday, live for today, hope for tomorrow. The important thing is not to stop questioning".
-Albert Einstein