sports, drugs and nothing even remotely as cool as rock and roll.

With the NBA finals upon us, the Stanley Cup playoffs finishing up, something about a Euro Cup that I know nothing about, baseball in full swing and the 2012 Summer Olympics starting up in less than two months, I'd say, bring on the sports reads! And the beer! And the nachos!

Not to get all serious on you first thing on a Saturday, but do you think that Michael Vick considered the ten-year-olds with his number on the back of their jersey's when he held a dog fighting ring on his property? Do you think that Manny Ramirez thought about the kids playing outfield in little leagues all over America, when he shot up steroids? Do professional sports players truly understand what kind of influence they have on younger generations?

In 2007 the MLB steroids scandal went public. Author Jim Gullo's 7-year-old son got pretty pissed about the whole thing, as you can read in Trading Manny. He couldn't comprehend why these baseball greats would use performance enhancing drugs. To hit 234038 home runs, and for what? Baseball was starting to mean nothing. In schools, we remind students on the regular to stay away from drugs. Thanks for the help guys, NOT.

In Trading Manny Gullo tells us how him and his son, Joe learned to love the game again. 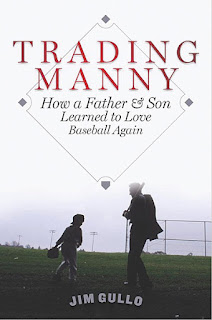