my neck of the woods.

I do understand that I find the memoir, Kodak elegy: A Cold War Childhood, more interesting because author William Merrill Decker was raised in Rochester, New York, which is practically down the street from me, about 30 miles. Would I normally pick up a Cold War memoir? Maybe if it read like Fifty Shades of Grey. 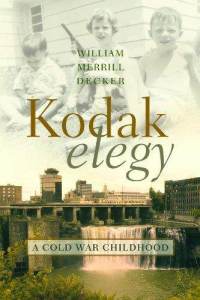 No Decker’s memoir is not super juicy, but it does include a number of “Kodak moments”, pun intended. He chronicles his life from the late fifties through the early seventies. His father was an engineer for Kodak, when Kodak was this happening company that everyone wanted to kick it with. Decker had a rather ordinary childhood, higher middle-class, living the American dream. Decker lived in a time of the Civil Rights Movement, JFK’s assassination, and the Vietnam War. He even brought up the 1995 Oklahoma City bombing, which was executed by a Western New Yorker. Is it strange that I never knew that? It is the way that he touches on the different issues of the time periods that makes this memoir worth reading.
at Thursday, June 21, 2012