suspenseful romance? aren’t they all?

When twenty-three-year-old Courtney Beckham is abducted near her home…DUM DUM DUMMMMMMM. What more do I need to write? I know you suspense addicts are already salivating. Joke. I’ll keep going… Courtney is abducted because she stumbled upon some drug lord’s marijuana stash in the mountains near her house in Utah. In a desperate attempt to avoid being sexually assaulted, Courtney tells her kidnapper her name and promises him a million dollars in ransom money if he'll contact her father. I mean, that was a little ambitious, even for a rich girl, but I’ll give this one to ya Courtney, desperate times and all. When the ransom demand is sent in with a picture of a beat up Courtney, the FBI takes over. Enter agent Jason Edwards, our Romeo, who quickly realizes that this is more than just your average wrong place, wrong time, kidnapping of a rich girl.


I love Courtney’s character. She is a tough broad. Thankfully, she is not sexually assaulted in this thriller, but she is terrorized throughout, and is still determined to not only survive, but figure out who is behind her capture. One slip of co-kidnapper’s wrist, and she sees the bosses name on the caller ID, (which is the title of the book, Caller I.D. by Rachelle J. Christensen), and it’s a name she recognizes. 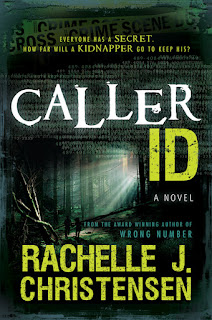 I’m pretty much suspicious of everyone. But that’s normal.
at Monday, April 30, 2012