the final installment of the hunger games. SPOILERS for first two books!

It has come to an end. I have officially finished The Hunger Games trilogy, and it left me feeling...a little pissed off at Suzanne Collins actually. There were no loose ends that needed tying up after I finished Mockingjay, Collins covered all her bases. Most of you will even consider the ending to be a happy one, but I can't seem to get over the loss of certain characters that I really enjoyed. I'm not going to spill it, but I will say that some of these characters we met right at the beginning of book one, throughout book two, and even got to know a bit in book three. I'm sad. Loved the series, but still sad. Probably because my cat (Alfonso) recently died. I'm feeling a little emotional lately. And, I wish this was me being funny. Okay, I am still a little funny. 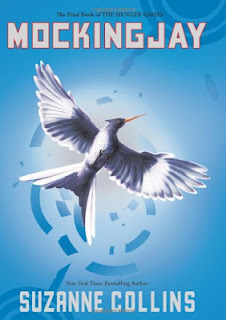 Mockingjay picks up right where Catching Fire leaves off. Katniss, Beetee and Finnick are snatched up from the arena by the head gamemaker Plutarch, Haymitch and the rebels of District 13, the district that was supposedly in ruin, but people were just living underground, making nuclear weapons and normal stuff like that. District 12 was blown to pieces, leaving hundreds dead and its residents, (including Prim and their mother, and of course Gale and his family, but not including Peeta's family), seeking refuge in District 13. The rebels couldn't save all six of the tributes from the arena so Peeta, Johanna, Enobaria, along with Annie, Finnick's nutcase girlfriend were captured by the Capitol and tortured for information. Over in District 13 there is a (lady) president, who is pretty much in charge of this rebel upheaval of the Capitol, and she wants Katniss to be the face of the rebellion. Katniss becomes the "mockingjay" and her face and actions are broadcast throughout Panem. Fueling fire to the rebels, keeping them fighting for their freedom from the Capitol and the awful President Snow. As you can probably imagine, this turns into a bloodbath. See for yourself. Oh, and I dare you not to cry. 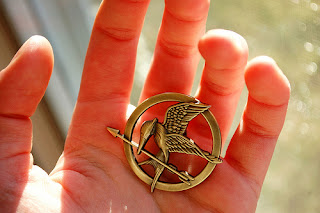 There was a Book Fair at school before spring break, and the kids were freaking out because if you bought the trilogy set of books, you got this free mockingjay pin. Even kids that owned the books already, were buying the box set because apparently these pins are being sold on eBay for like 30 bucks. I'm just glad to hear that so many of my students are reading, annnnnd I kind of want one of these pins also.
at Thursday, April 12, 2012