DON'T READ THIS IF YOU HAVEN'T READ THE HUNGER GAMES.

I began Catching Fire right after I finished The Hunger Games, but tried not to gobble it all up in one day. Really, I was saving the majority of it for my 7-hour Megabus trip to see the manfriend in Queens, and honestly it was the only thing that made the journey bearable considering I didn't plan ahead and pack mini bottles of vodka.

I suppose this is a Hunger Games spoiler...so I put a little warning label up for those of you who have not yet started the trilogy. Suzanne Collins does not disappoint with the characters, old and new, or the storyline in the second installment. It basically begins with the aftermath of Katniss and Peeta's return home from their victory of the games. They are now living in the swanky neighborhood designed for winning tributes, in houses with hot water and an unlimited supply of food and money. The Capitol is rather pissed at Katniss. For her and Peeta to win together, she basically called their bluff with the poisonous berry/double lovers suicide attempt. This has been causing some real problems in certain districts in Panem. People are beginning to question the Capitol's power, wondering why they let this young girl get away with such obvious defiance of the government. There have been uprisings and revolts, which left the Capitol with no choice but to do something so shocking, no citizen would ever question them again. For the seventy-fifth hunger games, the tributes will be pulled from the pool of the previous victors. Katniss is the only girl from District 12, so there is no question that she will enter the deathly arena, again. Will it be Haymitch or Peeta who joins her? Will these victors, young and old allow the Capitol to continue to use them as pawns in their death games? Or will they work together and all make it out alive? 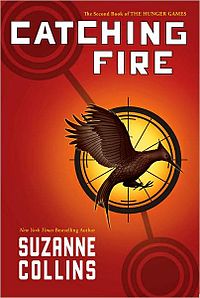 Left you on the edge of your seat huh? I wanted to finish Catching Fire before I traipse off to Ireland tomorrow, saving the final installment, Mockinjay for my return to America and my Kindle, which will not be taking the trip with me. I have a game I play where I buy a book at the airport before trips and read it along the way. So when I return in two weeks there should be another best-selling book review ready for you. Until then...read! The Hunger Games movie comes out March 23rd!
at Sunday, March 11, 2012