when an authors bio is just as interesting as her novel...

As the follow up to Taylor Stevens' novel The Informationist, The Innocent is set mostly in Buenos Aires. Vanessa Michael Munroe is back with her latest assignment, to rescue 13-year-old Hannah, who was kidnapped eight years ago by a cult called The Chosen of God. This cult is allegedly based on the Children of God cult, which Stevens herself was born into and didn't escape until adulthood. Hello intrigue. 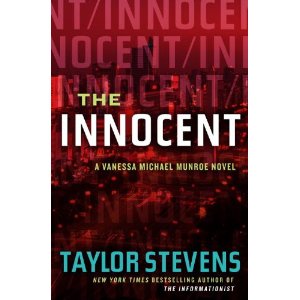 Stevens created an extremely fascinating character in Vanessa Monroe. In The Innocent, the reader gets more insight into the complexity of her psychological makeup as well as the changes she’s undergoing based on events in the first book of the series and the choices she makes in this one. This book also touches base on some tough issues that are based on truth. Children living in a religious cult, the selling of children, the sexual abuse of children. I may be crude, but these are issues that I have difficulty reading about. I pushed on because of Stevens' storytelling, it was brilliant, really.
at Wednesday, February 22, 2012