read to your kids. listen to me, i'm a teacher and related to abe lincoln, so listen to me twice. 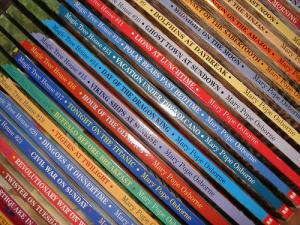 The Magic Tree House series is an award-winning series of children's books written by Mary Pope Osborne. In the first series, consisting of the first 28 books, Morgan le Fay sends Jack and Annie, two normal children from Frog Creek, Pennsylvania, on numerous adventues and missions with a magical tree house. Mary Pope Osborne started a second series called the Magic Tree House "Merlin Missions". In these missions, Jack and Annie have quests from the ancient wizard 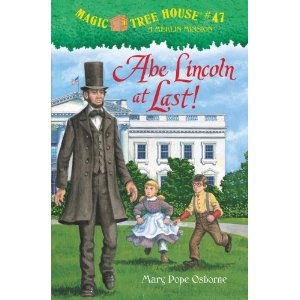 In Magic Tree House #47: Abe Lincoln At Last! Jack and Annie travel to the time of the Civil War, and they must help a friend of Abe's in order to find the third gift for breaking Penny's spell, the friend, is an orphan named Sam. It's a race against time as Jack and Annie try to decide to do what is right. But they must have hope. That is what Abe was mostly known for, after all.

My advice? When your kids hit second grade, start with book one. Read to them, or listen to the audio books in the car. They'll love the adventures, learn a lot, and so will you.
at Monday, February 13, 2012