my name is not easy either dude, everyone gets it wrong.

Like most people, I assumed the book My Name Is Not Easy, is about a girl who is trying to convince people that she is not a slut, or there's more to her than her sluttyness, or she's a slut who plays hard to get. Normal assumption. Well, it is actually about a boy who has a name that is hard to pronounce. Yes, really. 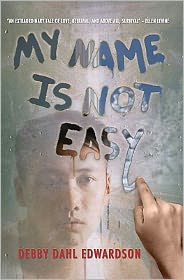 Now forget about the slutty girl and listen. Debby Dahl Edwardson uses multiple voices to portray the experiences of boys and girls who are brought together in a boarding school where Eskimo and Indian students are enculturated in white customs and values. Luke, from Arctic Alaska, is the main voice, and uses "Luke" as a nickname because the sounds of his native name are difficult to pronounce by white people. The book covers the five year span of 1960-1965, showing how Luke, along with his brothers and the rest of the children deal with being so far away from home. The food is strange, the language is strange and although these children have many similarities, Eskimo's and Indians take sides, even though they are all being taught to change what they've always known. As if acting "white" is superior to their cultures. It's a great story, and I have to say, it pulls at your heart a little.
at Saturday, February 11, 2012