Nicholas Sparks novels are every woman's guilty pleasure. OR every woman's normal pleasure, just guilty for me because I pretend to NOT be the hopeless romantic mush type of female, when in all reality I own every Sparks novel and cry every time I watch The Notebook, just like the rest of you saps. 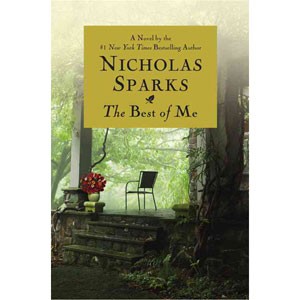 In Sparks latest The Best of Me he sticks to his usual style. Teenage boy meets teenage girl, parents get in the way, college gets in the way, jail gets in the way, and grown up boy sees grown up girl twenty years later and they hash it all out. Dawson Cole grew up in a family of criminals, it was literally built in to his DNA. The Cole's are the type of people who would murder their own kin, just because they felt like it. Dawson grew up wanting to be anything but a member of that family, receiving beatings instead of hugs for his efforts at school. Amanda Collier grew up in a family of over-privileged snobs. She had a beautiful fiery spirit and would never be given her parents blessing to live happily ever after with a Cole. Amanda went to college, an accident sent Dawson to jail, and their love (a passionate Sparks novel kind of love) was not strong enough to survive. Both of them now forty-two, the death of a close friend brings them together again. Amanda in an unhappy marriage with three children, and Dawson in a content but not exactly happy life, alone.

You see, there are some people who fall in love over and over. And there are others who can only seem to do it once.
at Sunday, February 19, 2012