in this case young people, please judge a book by its cover.

Hello gift-with-purchase-breakout-novel by Julianna Baggott, you've won me over so there's only a matter of time before the teenagers catch on. Pure, which hits the shelves tomorrow comes with this cute little butterfly pin. When it arrived in the mail, I noticed that on the pin it says "surprise inside," so being the child that I am, I scrammed to opened the very attractive (even as an advance reading copy) cover and I have no idea if this little "surprise" was just for me, or is included inside every copy of Pure, but I had a fricken heart attack. So thanks, and no I am not telling you all what you get when it opens. I am far too nice of a person to ruin it for you. 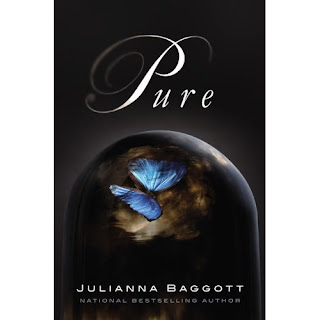 On to the story... Sixteen-year-old Pressia is one of the many survivors after a major disaster strikes the earth. During the nuclear blasts, many were permanently fused to whatever they were standing by. During this age, all teenagers at age sixteen must turn themselves over to either be trained as a soldier or, if they are considered weak, are used as live targets.  The "Wretches" are all those who live outside the Dome, and not all are still completely human. The "Pures" are those who escaped the disaster unmarked, and live safely inside the Dome. Like many of the others, Pressia has a deformity. Her left hand was fused with the head of her doll, and she is terrified that she is too deformed to be of use as a soldier, so she's on the run. She meets up with Partridge, son of a very influential "Pure," who has set off to find his mother. This story is told from the point of view of the "Wretches" and the "Pures" to give readers insight into both sides. Oh, and it's a series so be prepared for suspense.

This is a young adult read, and as a teacher I see some aspect of the Holocaust being taught in every secondary grade. The basis of this novel IS a nuclear Holocaust. I am not saying we should teach this story in class, but it is absolutely perfect for outside reading. I recommend it for older students, because it is really creepy. I see Pure helping this generation relate to such a thing as human corruption. I just sounded totally teacher-like.
at Tuesday, February 07, 2012